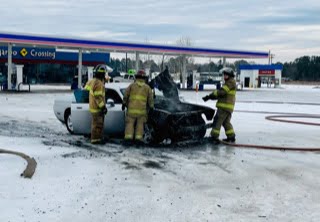 At 9:28am Kosciusko City Fire and Kosciusko Police were called to a car fire in the parking lot of Kangaroo Crossing.

When the firemen arrived on scene at 9:34am, flames were pouring out of the car’s hood.

The fire was put out a minute later with no injuries reported.