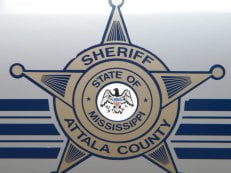 More information has come to light about the death of an prisoner in the Attala County Jail Saturday morning.

Sheriff Tim Nail tells multiple media outlets that 48-year-old David Williams was found hanging from a belt in his cell around 3:40 a.m. Sunday. Nail says Williams was alone in the cell before his body was discovered.

An autopsy has been ordered. The Mississippi Bureau of Investigation has joined the investigation.

Williams was sentenced in 2011 to 10 months in federal prison. He had been arrested that July after University of Mississippi Medical Center officials in Jackson reported that he made the threats during an irate telephone call. He pleaded guilty to two counts. Williams also made threats against President Barack Obama during the incident.

7-18-2015: Sheriff Tim Nail reports at 3:45 am Saturday morning the jailer found 48 year David Williams dead in his cell. Williams had been brought in Friday night on a federal probation warrant. The cause of death was an apparent suicide. Williams body was sent to the state crime lab for autopsy. MBI is assisting in the investigation.