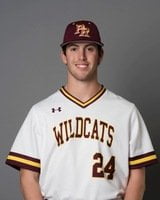 Photo: prccathletics.com
Posted on May 28, 2019 by Breck Riley

Jerod Meggs, a 2017 KHS graduate, and his team, the Pearl River Community College Wildcats, are currently 1-1 in World Series play from Oklahoma.

This is the first World Series appearance for the team since 2002.

Meggs, who will continue his baseball career at the University of South Alabama following this season, pitched 3 innings of scoreless relief in the game Monday. He recorded four strikeouts and only gave up one hit.

The Wildcats will face Pasco-Hernado State College Tuesday at noon in an elimination game.