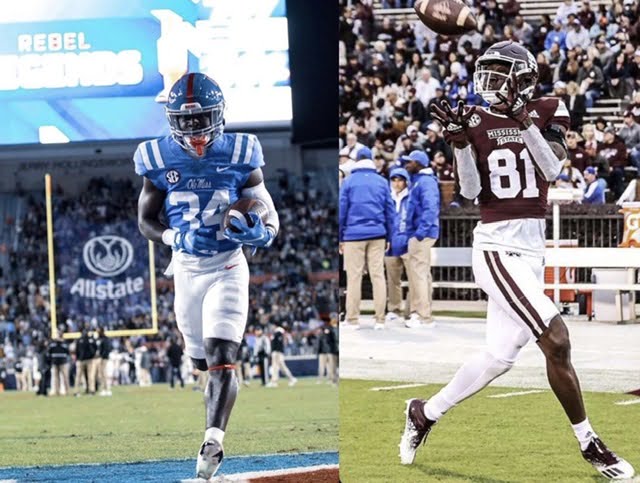 When Mississippi State and Ole Miss take the field Thursday for the 94th Battle for the Golden Egg, a couple of former Whippets will be on opposites of the ball.

Former Whippets Xavier “Bobo” Miller and Antonio Harmon will face off against each other for the first time, Miller as a Rebel and Harmon as a Bulldog.

“Man he’s my family, but during those 60 minutes and between those lines…he’s my enemy,” joked Harmon.

“I’m excited about going against him,” says Miller. “Win or lose, that’s my brother….”

Harmon and Miller won’t be the only friends facing off in the game.

Much has been made about the friendship between the school’s head coaches, Lane Kiffin at Ole Miss and Mike Leach at Mississippi State.

“I like him. I’ve always liked him,” said Kiffin of Leach. “He’s funny. He’s a done a great job wherever he’s been.”

When asked about his relationship with Kiffin, Leach said the intense nature of the rivalry hasn’t really changed it.

“It is about the same, ” said Leach. “There hasn’t been as many circumstances when you see one another. I have known him for decades, so it’s really pretty much the same. We haven’t seen each other as much just because they haven’t had the conventions and the gatherings as much.”

The 94th edition of the Egg Bowl is set for a 6:30 pm kickoff Thanksgiving night on ESPN.