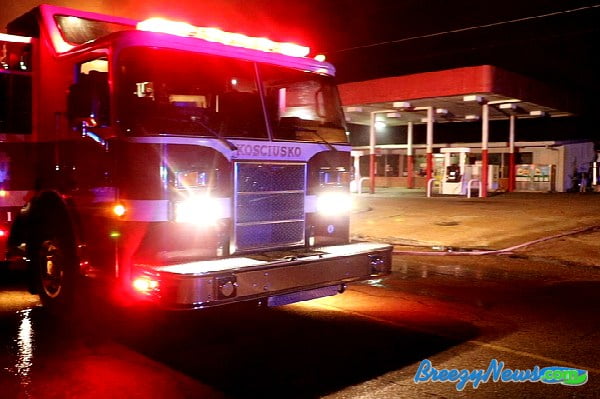 At 1:51 am Kosciusko Police along with Kosciusko City Fire were called to a report of a structure fire on highway 12 west. The caller said it was located at the old Collins Bait Shop.

MedStat EMS was called to the location for medical standby in case their services were needed.

Emergency personnel arrived on scene and notified responding units that an abandoned house trailer located behind the structure was fully engulfed in flames.

Emergency personnel shut down highway 12 for a short time while emergency crews worked the scene.

Kosciusko Fire Chief Duane Burdine tells Breezy News that there was actually two fires at the scene. One in the trailer and one in a structure attached to the main convenience store building. The house trailer was a total loss while the convenience store sustained no damage according to Chief Burdine.

The State Fire Marshal has been called to assist in the investigation on the cause of the fire.

No injuries were reported and fire fighters cleared the scene at 4:44 am.