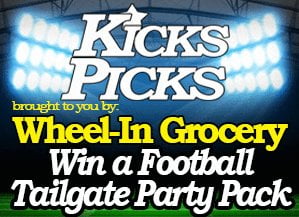 It was a battle to the end for the contestants playing Kicks Picks Presented By Wheel In Grocery of Carthage final week of the year. Eleven of those entrants tied for the top spot of Week 12, and following the tiebreaker procedures the winner is Lynda Pickett of Philadelphia.

Congratulations Lynda you are the winner of the Tailgate Prize Pack from Wheel In!

Thanks to everyone that played Kicks Picks this season which was the most played in the contest’s history.

The season’s grand prize winner will be announced in the near future and will receive the tv prize from Wheel In Grocery.