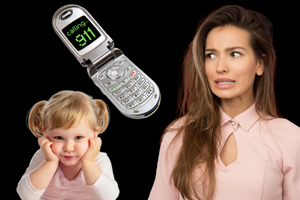 Did you know that any cell phone with a charge can call 911? I did, but some of my coworkers did not.

A conversation arose in the “big radio building on Golf Course Rd” after I heard about dispatch in Leake county had receiving numerous calls from a child playing with an old cell phone. I mentioned to my coworkers what happened and told them the child was using a cell phone with no service provider, so 911 dispatchers couldn’t call them back to let the parents know what was going on. I thought everyone knew that you can dial 911 on these old phones, but it turns out they don’t. So, we’re letting you know!

The following information about using cell phones with no service provider comes from 911.gov.

All wireless phones, even those not subscribed to or supported by a specific carrier, can call 911. The call centers cannot call these phones back to find out the caller’s location or the nature of the emergency. If the call is disconnected, the 911 center has no way to call back the caller.

Lots of parents give these uninitialized wireless phones to their young children as toys, unaware that if the child dials 911, a live call will be connected with the local 911 call center. Children should be told not to dial 911 from these old or uninitialized phones, and it is recommended that parents remove the phone’s battery before giving these phones to children.

If you dial 911 by mistake, or if a child in your home dials 911 when no emergency exists, do not hang up – that could make 911 officials think that an emergency exists, and possibly send responders to your location. Instead, simply explain to the cal-taker what happened.

So, parents be sure to take that battery out of the cell phone you give your child to play with or talk to them about the importance of only dialing 911 if there is an emergency. Also, while we’re on the subject be sure to teach your children how to dial 911 in an emergency, what their home address, and what their parent/guardian’s full names are.