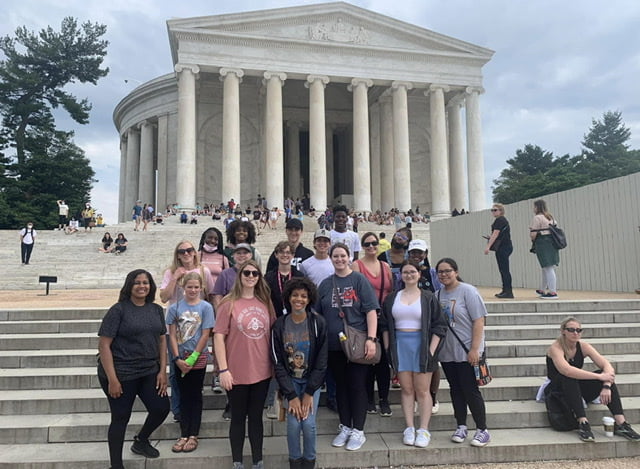 *Story and pictures by Stephanie Holmes.

On June 11, a group of 12 students and 6 adults from Kosciusko Junior High School and Kosciusko High School traveled to Washington, D.C. and New York City.

The group departed Memphis on June 11 and returned June 15.  After a short flight to DC, the group met their tour director, Marsha. The first stop of the day was at the Smithsonian museums, where the group saw the ruby slippers, the hope diamond, and the flag that inspired “The Star Spangled Banner.” The group then began a tour of the monuments around the Tidal Basin with a photo stop at the Washington Monument before dinner.

After dinner, the group continued the tour with a photo stop at the White House and at the Thaddeus Kosciuszko monument in Lafayette Park. The group then visited several more monuments, ending with the Vietnam Wall, Lincoln Memorial, and the Korean War Memorial.

After a good night’s sleep and breakfast, the group continued their tour of Washington with stops at the MLK and FDR memorials and Capitol Hill. They then traveled to Mount Vernon, home of George Washington. The group toured his home, visited his and Martha Washington’s gravesite, and explored the area. That afternoon, they traveled to Alexandria for dinner. After some free time, the group went on a ghost tour, where they explored the haunted side of Alexandria.

The group checked out of their hotel in Maryland after breakfast and went back into D.C. for the morning. They visited Arlington National Cemetery, where they visited JFK’s gravesite and Arlington house. They then watched the changing of the guard at the Tomb of the Unknown Soldier. It was a very moving experience. After lunch in Pentagon City, the group visited the Pentagon 9/11 memorial before making the drive to New York City.

When the group arrived in NYC, they had dinner at Hudson Yards before going to the top of The Edge to enjoy views of the skyline. Some of the group even braved standing on the glass floor! They then traveled across the Hudson River to their hotel in New Jersey. They all had amazing views of the NYC skyline and were able to watch the full moon rise over Manhattan.

The group started the day off with a trip to Ellis Island and the Statue of Liberty. Everyone took pictures in front of Lady Liberty and enjoyed lunch at Ellis Island before exploring the museum. The group spent the afternoon touring the Financial District, where they got to see Wall Street, Trinity Church, Alexander Hamilton’s grave, and the Fearless Girl and Charging Bull statues. The group then visited Ground Zero and walked around the 9/11 Memorial.

The group then hopped on the subway and made their way to Times Square! After a quick souvenir stop and dinner, the group went to see the Broadway show Come from Away, which tells the story of how the town of Gander, Newfoundland, took in flights stranded after the 9/11 attacks. After the show, several of the students were able to speak with the actors as they exited the theater.

The group started off the day with another walking tour. After talking to the walls in the Whispering Gallery in Grand Central Station, the group visited the New York Public Library, where they were able to see rare books, original copies of the Constitution and the Declaration of Independence, and the toys that inspired the Winnie the Pooh books.

The group then enjoyed New York Pizza for lunch, explored F.A.O. Schwartz and Rockefeller Center, where some of the students met Hoda Kotb, and Central Park, where they visited Strawberry Fields.

They then traveled to the airport and bid farewell to their tour director, awesome bus driver Alex, and NYC.

Plans are being made for a June 2023 trip to Boston.