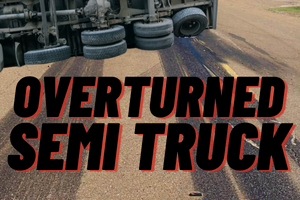 6:22 a.m. – Kosciusko Police responded to a call reporting a disturbance at a residence on Lowery Street.

10:37 a.m. – Attala County Deputies, Attala County Fire Department, Emergency Medical Services, and MS Highway Patrol were dispatched to a two-vehicle accident at the intersection of Highway 35 South and Highway 19 South. It was reported that a semi truck hauling corn and a car collided. When firemen arrived on scene the semi was on its side. One person was transported to the hospital with non-life-threatening injuries.

11:10 a.m. – Kosciusko Police received a call reporting a minor two-vehicle accident in a parking lot on 4th Avenue. No one was injured.

11:34 a.m. – Kosciusko Police responded to a call about a minor two-vehicle collision in the parking lot of Burger King. No one was injured.

11:57 a.m. – Kosciusko Police were called to the Dollar General in the Parkway Plaza regarding a shoplifter.

1:52 p.m. – Attala County Fire Department and McCool Volunteers were dispatched to a woods fire with a structure in danger on Attala Road 5223. Flames were nearly out upon arrival.