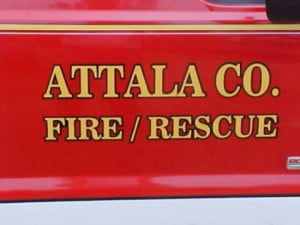 At 2:16 pm Tuesday, Attal Fire and Rescue responded to reports of a truck fire on Attala Road 5205 near Doty Springs Baptist Church. The driver of the truck told responders that began billowing from under the hood of the vehicle while it was being driven. The driver was able to get to safety, but an AFR spokesman tell Breezy News that the truck was a total loss. AFR cleard from the scene at 3:29 pm.

Attala Fire and Rescue worked a two car motor vehicle accident (MVA) on Hwy 19 N early Tuesday morning. The cause of the wreck is unknown at this time, but AFR officials tell Breezy News that four people were injured in the accident. The victims were transported to Baptist Medical Center-Attala for treatment.