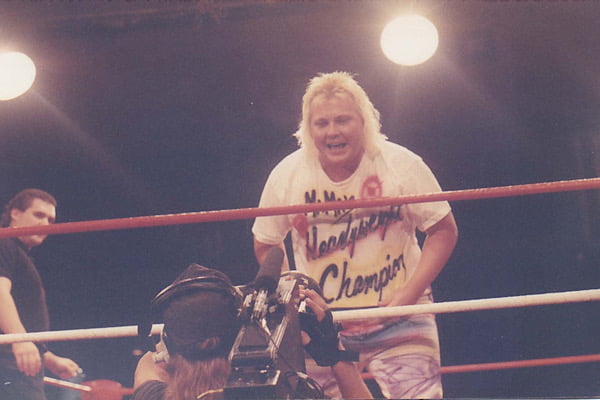 There’s a DJ in Philadelphia that’s been in the radio business for nearly four decades now. He also had another job for the better part of 20 years that allowed him to travel the world, meet a lot of great athletes, and get beat up quite a bit.

Lolly Griffin is the Program Director of Kicks 96 Radio in Philadelphia and Promotions Director of Boswell Media in Kosciusko. He’s had the job for just over a year.

Griffin got his start in radio back in the early 1980′s in Alexandria, Louisiana. In between radio gigs, “LOLLYDUDE”, as he’s known, became involved with the wrestling business.

“I was friends with those guys from the gym,” said Griffin. “I got to start riding around with them a little bit and before you knew it I was getting my brains beat in for 75 bucks and enjoying it.”

LOLLYDUDE made wrestling his full time occupation in the 1990′s, literally traveling the world with some of the top stars of that ear. While he admits he wasn’t the best wrestler in the word, he survived the tough business by literally learning of of the ropes.

“I knew I was the worst wrestler to ever make a living but I was a pretty good referee. I was pretty good on the mic and I knew that if I learned everything, how to set up the ring, how to sale popcorn and sale tickets. But I also went to the TV truck and I learned how to do everything. Direct, produce, scoreboard, graphics, whatever they needed to be done, I just watched and learned.

And as far as wrestling being fake, let’s just say there’s no way to fake the physical toll it takes on a body. “You tell me it’s fake. I had, gosh, how many concussions. I can’t tell you. A finger broke in the ring. Just snapped. A guy had me hooked and just snapped my finger. Knees, hips and elbows. You just get it all.”

And now approaching age 60, could LOLLYDUDE be contemplating a comeback? A recent incident with a similarly aged newscaster might give us insight. You can watch that incident on this week’s edition of County Road 11 with Lindsey Hall on Newscenter 11 at 6:00 and 10:00 on Thursday night and again on Good Morning Meridian Friday.