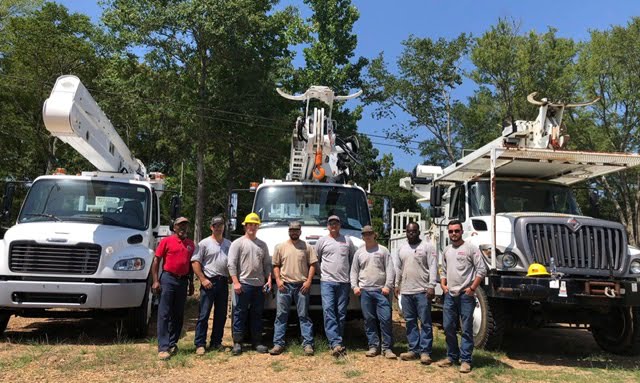 The Holmes Community College Electrical Lineman program is in the process of being relocated to its new site at the Bulldog Ranch off I-55 in Goodman.

Yazoo Valley Electric Power Association, a partner of the program since its inception, continues to help Holmes become a force in educating the future lineman of the southeast. Yazoo Valley has been instrumental in moving the program from its old site on Highway 14 to the Bulldog Ranch.

“At that time, it was hard to get lineman and hard to get schools to start a lineman program,” Yazoo Valley’s Josh Reeves said. “The only other program at that time was in Lucedale. It [Holmes] has turned out to be, in my opinion, the best one in the state of Mississippi. It’s of extreme importance for the young men and women getting into this field of work because everyone doesn’t want to do this. It puts them one step ahead of everybody else and lets them get an idea of what lineman work is all about.

Yazoo Valley employees, many of whom are alumni of the Holmes lineman school, facilitated the move to the new location.

“We are taking all the poles down at the old school, moving the poles and equipment to the new location and setting up the poles so the first class going through the program at the new place can start climbing ASAP,” Reeves said. “We are trying to build a few other things up there to make the school better for anybody that wants to go through it.”

He expects Yazoo Valley’s part of the move to be completed in a few weeks.

“A lot of hard work went into moving to our new location,” said Workforce Development Coordinator Mandy Burrell. “We are especially appreciative to Yazoo Valley for helping us with the move. The partnership between Yazoo Valley and Holmes has been an integral part of the program’s success. They continue to support us in a variety of ways.

“We are excited about the new lineman location,” she added. “It will allow us to continue to produce quality lineman that not only changes their lives, but also helps our great state.”

For more information about the program, contact Burrell at mburrell@holmescc.edu or call (662) 290-0808 or visit https://holmescc.edu/workforce-offerings/electrical-lineman-program/.

Holmes CC Homecoming set for Oct. 27 on the Goodman Campus

Holmes vs Northeast Mississippi to be played at Madison Central